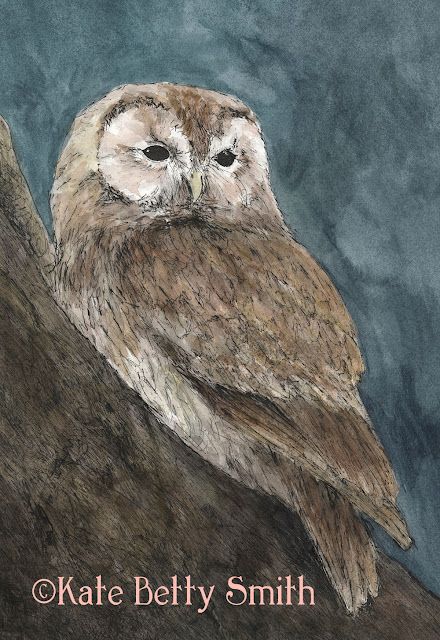 Owls have long been associated with witchcraft. In England it was believed that cooking owl eggs until they became ash was an excellent ingredient for various potions including one to improve eyesight.

In some stories, owls were seen as an omen of death, perhaps due to their unearthly screeches frightening people at night! However in other parts of Northern England, it is good luck to see an owl.

'Evenfall' is now available in my Etsy shop as a greeting card or small print.
Posted by Kate Betty Smith at 10:29 am No comments: 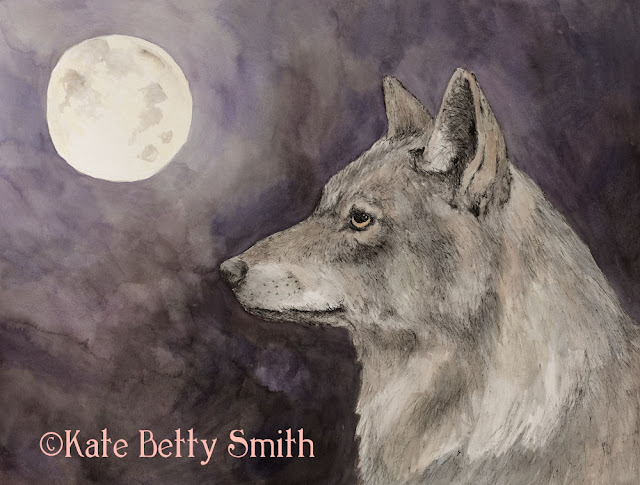 Although no longer to be found in the wild in the UK since around the 17th century, wolves in British folklore are seen as animals to be feared, We are all familiar with tales of wolves in the woods, luring and eating unsuspecting children or grandmothers. The wolf also snatches women and  babies in some British tales. In Medieval stories, he would spit on his paws to make his approach silent to unsuspecting victims, or bite a paw if he trod on a twig. This image appears in some church carvings.

There are a few stories where the wolf is shown in a positive light- in some Scottish stories, a wolf nurtured human babies and in some saints’ legends the wolf appears as a dog-like companion. There is a story of a wolf guarding St Edmund’s head near Hoxne, Suffolk.

There are many stories about the ‘last wolf’ hunted in England. January was known as ‘wolf month’ because it was the time of year when people were in most danger of falling victim to wolves and the wolf hunting season was between 25th December to 25th March. There are stories of the last wolf being killed in Cheshire at the end of the fifteenth century, at a farmhouse named ‘Wolfa’ near Great Salkfield in Cumberland, or at Wolverstone in Devon. There are also stories of a wolf being killed at ‘Wolfscrag’, West Chiltington, Sussex but it is thought that many of these stories were most likely inspired by their wolfish place names.

In recent years there have been proposals to reintroduce wolves to parts of Scotland and England.

'The Last Wolf' is now available in my Etsy shop as a greeting card, small or large print.
Posted by Kate Betty Smith at 10:25 am No comments: